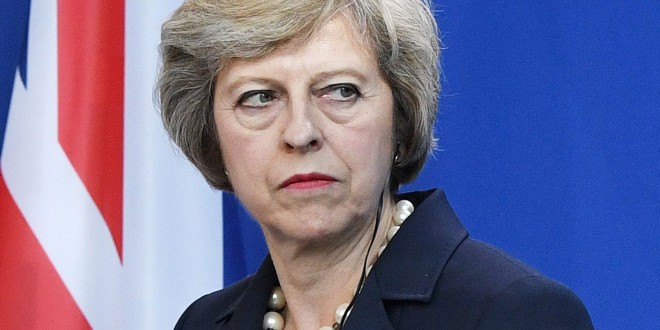 The Prime Minister has struck a conciliatory note to business leaders who have demanded that Britain stays in the customs union in a transition period after the legal date of Brexit in 2019.

Speaking to Sky News at the G20 summit, Theresa May chose not to restate the position of the Conservative manifesto that “we will no longer be members of the customs union”.

Instead, when asked if businesses should now plan to be out of the customs union on 30 March 2019, the PM told Sky News: “We can’t be members of every part of the customs union but we want to continue to have tariff free and as frictionless trade across borders as possible because we want to ensure we have that good trading relationships with the EU.”

That language appears to take the Government’s position back to where it was at the time of the PM’s Lancaster House speech, that some form of associate customs union membership might be envisaged. This language was tightened up in the Conservative manifesto.

There is currently a fierce cross Whitehall Cabinet argument over where, how, and when Britain departs the customs union, which is crucial to major multinational manufacturers such as Airbus and car makers.

There is a trade-off between keeping the free unfettered trade in goods and parts across the EU and the ability for Britain to strike new trade deals independently.

The Treasury has challenged the Department for International Trade to show any figures that prove the trade gained from new deals will make up for the trade lost by leaving the customs union.

Sky News asked the Prime Minister if she could “guarantee that the deals signed by Liam Fox with other countries will make up for any loss of trade in the EU”.

The PM did not answer the question directly, responding: “What I want to see is the UK a Global Britain with free trade agreements around the world – that is what Liam is looking at in terms of his talks that we have already started with the Americans, with India and other countries around the world.

“But I do want to see deep and special relationship with the EU and a comprehensive Free Trade Area with the EU so we can continue to trade with EU.

“That’s not just in our interests it’s in the interests of the remaining 27 member states of the EU as well that’s why we can negotiate a good deal that benefits both us and them.”

Business leaders asserted themselves on the issue of the customs union and single market ahead of a summit with the Brexit Secretary David Davis at Chevening today.

When asked if she had changed her approach to Brexit or to the customs union in any way since failing to win a majority at the election, Mrs May told Sky News she had been “clear from the beginning of this negotiation” that Britain wants a “deep and special partnership with EU – we’re leaving the EU not Europe”.

Number 10 sources said that there are a variety of different issues around the customs union, including the difference between leaving it and potentially joining a new UK-EU customs union, and in addition the timeframe and transition arrangements.

On Thursday, the PM, speaking to reporters on touchdown in Hamburg, reiterated her timetable for Brexit talks, rejected by the European Union, saying that the “future relationship with the EU” will also be agreed “by the end of the negotiating period” – ie before March 2019.

Responding to the plea by a combination of business groups and unions for a prolonged transition period in the single market and customs union to avoid “multiple cliff edges”, the PM said: “We want to ensure is that process of not just withdrawing but moving to a new relationship is as smooth and as orderly as possible and that means ensuring that where there are practical reasons why you need to have an implementation period those will be discussed those can be agreed, and people can put in place the necessary practical steps that they need”.

The PM will continue talks with world leaders in Hamburg today and tomorrow.