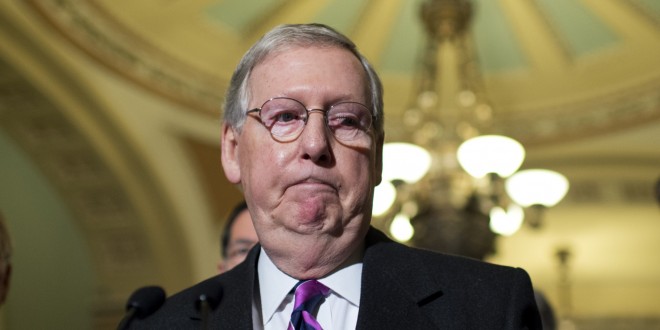 As Republican efforts to get rid of former President Barack Obama’s health care law stall in the U.S. Senate, Kentucky’s two senators are traveling the state to talk about it.

They just aren’t talking to each other.

U.S. Sen. Rand Paul has emerged as one of the biggest obstacles to passing the Republican answer to the Affordable Care Act, adding another wrinkle in his complex relationship with Senate Majority Leader Mitch McConnell.

On Thursday, McConnell acknowledged for the first time publicly that the Republican health care bill might fail because of spirited opposition from a diverse group of GOP senators. Hours later, Paul reiterated his “no” vote while detailing a list of changes for reporters. He said President Donald Trump, who won 118 of Kentucky’s 120 counties, agrees with him.

“I talked to the president about it. He was very receptive,” Paul told reporters in Louisville after a closed-door meeting with national restaurant groups. “We haven’t had any feedback from the Senate Republican leadership.”

Paul and McConnell have a complicated history that dates back to the 2010 U.S. Senate race. McConnell wanted former Secretary of State Trey Grayson to win. But Paul won the primary and the election. Since then, McConnell has carried the flag for the Republican establishment while Paul has led the libertarian wing of the party. Their priorities have often clashed, and Paul has not been shy about voting against his party leader.

However, the two men also have needed each other politically. In 2014, with McConnell facing a primary and a well-funded Democratic challenger, some of Paul’s campaign staff went to work for McConnell’s re-election. McConnell returned the favor by endorsing Paul’s presidential campaign.

Paul said one thing that could get him closer to voting for the bill would be to let people seeking to buy health insurance on the individual market join together to have more leverage against insurance companies. Kentucky already allows this, but the associations cannot cross state lines and not everyone qualifies.

Paul wants to remove those restrictions. He said that would allow AARP’s 37 million members to buy health insurance as a group and would give power back to small business owners who often have trouble finding insurance companies willing to sell to them. In Kentucky, 59 of the state’s 120 counties have just one insurance carrier in the individual market.

“It doesn’t require a mandate; it requires a liberalization of the law. It requires more freedom to let people associate across states lines,” Paul said.

McConnell said Thursday that he believes “every Republican is in favor of association health plans,” but said the problem is that Senate rules likely won’t allow the bill to be amended to include it.

“What we’re trying to do is a very complicated procedure,” he said. “I’m in the position of the guy with the Rubik’s Cube, trying to twist the dial in such a way to get to at least 50 members of our conference who can agree to a version of repealing and replacing at least as much of it as we can agree to do. That is a very timely subject that I’m grappling with as we speak.”