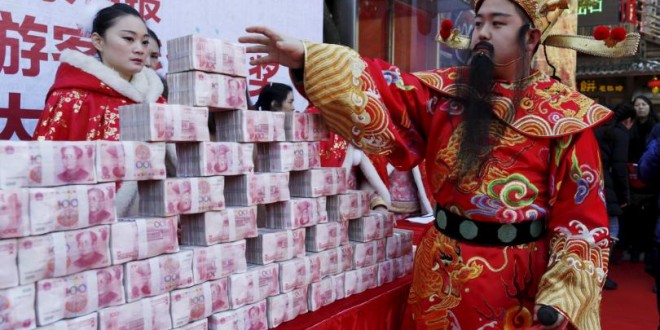 The People’s Bank of China withdrew 840 billion yuan ($129 billion) from the country’s financial system in five days through Friday, its biggest weekly withdrawal since February 2013, according to data compiled by Bloomberg. PBOC was mopping up excess liquidity infused in the market by the central bank’s decision to cut the reserve requirement ratio (RRR) earlier this week.

The RRR reduction, effective March 1, released an estimated 685 billion yuan ($105 billion) into the banking system, Bloomberg reported, and money markets did not show any significant reaction to PBOC’s move to withdraw cash.

Meanwhile, Zhou Hao, a professor at Tsinghua University’s PBC School of Finance and a former senior economist at the U.S. Federal Reserve, recently told Xinhua News Agency the expected slower pace of Fed rate hikes this year would limit further appreciation of the dollar, easing the pressure on the yuan and slowing capital outflows from China.

“The worst period of concerns about sharp depreciation of the RMB [yuan] and dramatic capital outflows from China may be over,” he said.

Citing the official newspaper of the China Securities Regulatory Commission, Reuters reported Friday that Yi Gang, a vice governor of the central bank, said levels of China’s foreign reserves would stabilize as expectations on the yuan become steady.

The country’s forex reserves, the largest in the world, have fallen by over $750 billion since mid-2014. They fell by almost $100 billion in January and likely fell further in February, according to Reuters poll, settling at about $3.2 trillion.